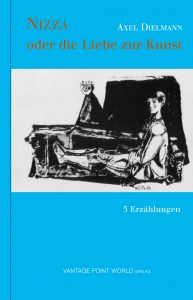 Nice, Capa, Elsa and Matisse: Four journeys to southern France’s Nice: over a period of nine years someone tries to buy a foto that shows the elderly Matisse while drawing. Who was the fotographer of the picture? Why does it become expensiv and more and more expensiv with each journey to Nice? Who actually was that woman that shared these times in Nice? And has it got to do with that mysterious foto that the lover became close friend, than wife, and after all ex-wife of our traveler?

Claire / Art Atoms, Edges, Cuts (»Claire / Kunstatome, Kanten, Schnitte«): Some one sitting in a café, waiting for his beloved. She is an art historian in a famous museum; which wouldn’t dramatize the situation, if not he would be a ridiculous arts thief: He dies out, cuts, sews, pulls little parts from works of art—he takes them for »Art Atoms«.—Does she understand this special approach towards arts? Or has she already called für police meanwhile he thinks of her—and of his collection of Art Atoms. –> –> –> Together with film director Lara Maria Olbeter and FalkFilm-Produktion I prepare the film script for cinema distribution of the narration at the moment—a thrilling new sort of adventure, even so by far not as thrilling as collection Art Atoms. 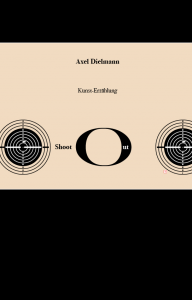 Shoot Out: An artist doing Multiples is driven by the idea of a drawing: The picture that he imagines is that of a shooter aiming at his viewer. However, the life-sized picture will not be scetched with charcoal and pencil—it will be pointed out on a firing range into a pad of paper tall as a man. Now the finished picture is shown in the gun club, and that’s where it happens …

The Human Bed (»Das Menschenbett«): Ill to death, Liz, a wealthy collector, had the last wish to be layed onto one of the sculpture of her collection in her second last night: a bed in the form of a human corps, a sort of Procrustean Bed. This is what the widower tells the artist of this certain bed sculptur as they drive to Liz’s funeral service together. Both, it seems, try to find out, what art meant to Liz, and especially this work that has its very different connotations for the two quite different men. 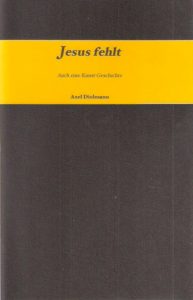 Jesus missing (»Jesus fehlt«): During night times an Unknown in a small town has hammered three long nails into the wall of the Church—the sort of nails that carpenters in some places call »Jesus’ nails«. The members of the parish council harshly discuss over the turn of four meetings whether this is art—or is it trash that immediately should be removed?—Inbetween this discussion enfolds the entire history of Pietá and deposition from the cross in arts, offering a totally new scope on clerical arts. In this most stressed situation a new series of »art attacks« meets the House of the Lord.

Boy with a Fairy Tales Book (»Junge mit Märchenbuch«): A collector of modern arts undertakes a last circuit through his collection, starting with Willy Sitte’s gouache »Junge mit Märchenbuch«. But on his walkabout our collector is accompanied by a bailiff who came to execute from his collection. Each piece of art now is valued, each bit has its own story. Two views on art clash that could not come out more different. 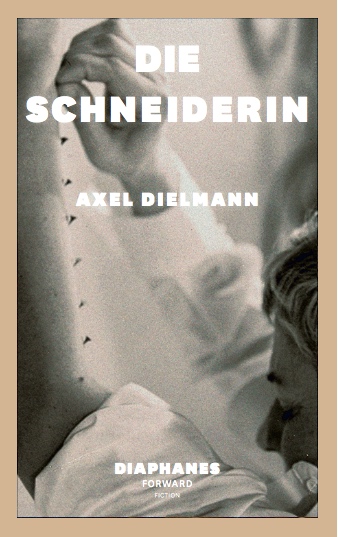 The Dressmaker / Model’s Cut (»Die Schneiderin«): A psychotherapist visits an exhibition on Body Art, situated in a historical anatomy’s building. He drove there because one of his patients who cuts herself is expected to be shown in the exhibition with own pieces of body (and) art. Is this why he looks so long and deap to the other work of self-violation in this exhibition—because he expects his patient having done a rather hugh, rather dangerous, in the end mortal injury? That, perhaps, he does not really want to get confronted with?—This therapist is on a very personal track! –> –> –> A longe piece of it was beautifully translated by Michael Turnbull and printed in diaphanes’ huge-sized diaphanes-magazine, and you’ll find this excerpt HERE. The entire narration was out in March 2019 in the program of diaphanes publishers Zurich and Berlin.

Heavily Injured III (original title, English): Two full-blooded intellectuals, whose friendship is getting on in years, try to save a joint film project: They have collected thousands of short film clips showing the worst scenes of violence and bodily harm, war films, crime thrillers, series of murders; they have juxtaposed these disfigurements with an elaborate series of interviews with those who have to heal such destruction, traumatologists and surgeons, rehabbers and therapists, accident doctors and prosthetists—but do they get together what can be seen in our cultures in so many ways and in passing in imagined violence, but in life can only be made good in the most laborious of care? Over the course of an afternoon and evening, Oscar and Alexander try to move their project forward and clarify their friendship.—Do violence, destruction and transience stop at this delicate situation?

Ash Ashes, Tramp Meets Land Art: David Nash, the Welsh Land Art artist, visits his Ash Dome early one morning, the work of art made of 22 ash trees that has been growing since the 1970s—which, like over 90 percent of all ash trees in Europe, are dying of a fungus. What to do with a dying work of art that should have survived its own artist?—Now there is one lying in the circle of trees, and it looks as if the stranger is dying just like Nash’s trees. What can be saved? What is it too late for? Should we intervene? Do what?—The tramp lying there badly injured has nothing to do with art. But he knows something about staying power, about being on the road and outside, which is heart of Nash’s art. So what do the two have to say to each other? What do you talk about when things get tight? What does it mean when things get tight?

Triz, tree chronicler: A photo, Max Pechstein drawing his son on it, looks at the seven-year-old sitting opposite him at a small table. Mäki Pechstein, a silly Indian feather headdress on his head, looks sullenly back at his father’s drawing. Pechstein’s drawing hand over the sheet pauses, the painter assures himself by glancing at the boy.—Into this pause in the photograph from 1933, a father and his autistic son contemplate it. They are standing in the Zwickau Art Collections, they are always having a hard time communicating about what they are looking at together, a row of trees in the wind, the sky over the garden, a fidgety mobilé by George Rickey, the emergence of cobwebs, a fireplace that is burning or not burning. But from the paused triangle of the photograph, Pechstein and Mäki and drawing, the two viewers will derive a sign of agreement for themselves. Triz, the boy in front of the Pechstein photo, holds out a three to his father.—What that looks like, how it developed from their laborious exchange, that will have to wait. For now, let’s look at the Pechstein photo with them and in their so different ways for a while. And follow George Rickey’s »Four Lines Oblique Giratory«. And the clouds over the garden. And look at trees. And »La Dance« by Matisse. And then it’s time for Triz to make a new sign.

Mircho’s Microphon (Mirchos Mikrofon): An unspeakably gossipy story that Mircho tells an ambitious art historian there, long after he—she remains sceptical about the veracity of this information—worked as an assistant and studio manager for important artists such as Jiří Kolář and Tinguely and Petch. Petch? It is the artist who achieved rapid success on the art market, of whom his gallerist Scheppeler says: »Without him, the multiple would never have achieved new significance. The large multiple is his original aesthetic achievement«? But, as with Banksy or B. Traven or Thomas Pynchon, almost nothing is known about this artist Petch—except for the sentimental ramblings of Mircho, the Czech, who speaks of art history in brittle German and is only too recognisably confused in the dense undergrowth of his memories. Does what he babbles about his other favourite artists perhaps offer a clue to his credibility? And what does credibility matter if the stories are worth telling? Are they?—Mircho is of the opinion: »What one should not be silent about, one must stammerror about«. O my God, Mircho!

Some Artists that occure in my narrations do appear in more spacy entries; those are written in italics in the list below—a lot more such entries to come:

* marks objects or quotations by artists not confirmed …